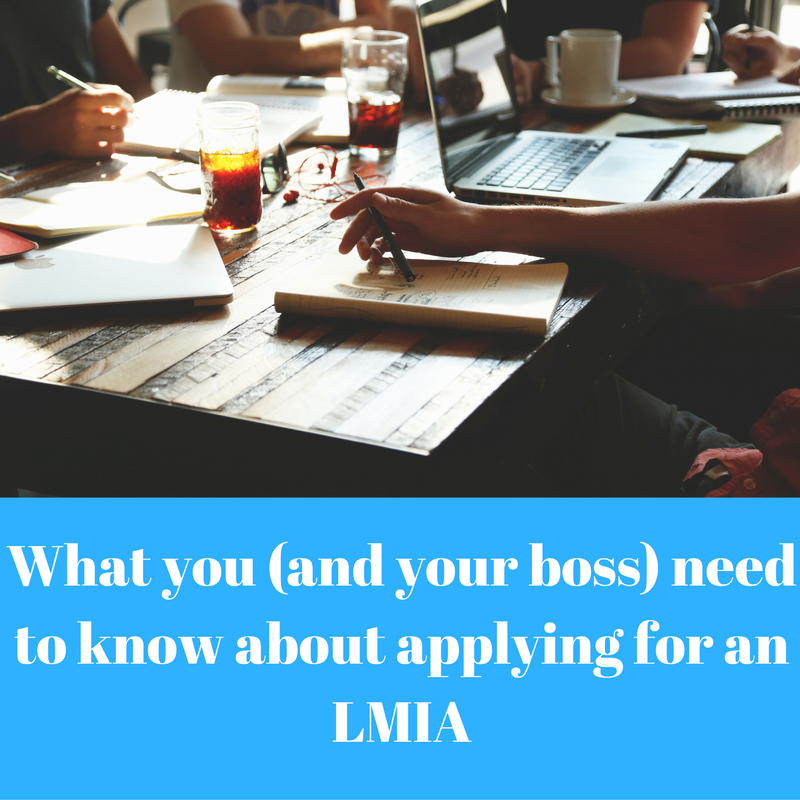 An LMIA, or Labour Market Impact Assessment, is a document obtained by a Canadian employer that allows them to hire a foreign worker. For those looking to enter Canada through the skilled worker or skilled trades streams, an LMIA job offer can make all the difference, earning you an additional 600 points towards your application through Canada’s new Express Entry system.

Silvia Bendo is a RCIC—or Regulated Canadian Immigration Consultant—based in Toronto. She specializes in helping skilled foreign workers—often with experience in the trades or construction— gain entry to Canada through one of several temporary and permanent foreign worker programs. We caught up with Bendo to discuss what you and your potential employer need to know about applying for an LMIA.

1.While an LMIA boosts an individual’s application, it is the potential employer, not the individual, that needs to apply for it.

Bendo’s clients are always looking for ways to add an LMIA job offer to their immigration packages. It isn’t hard to understand why. Within Canada’s new Express Entry system, securing an LMIA can boost an application by 10 points at the qualifying level and another 600 in the final Comprehensive Ranking System (CRS). But as a document that grants permission for a company to hire outside the Canadian labour pool, an LMIA is not granted to an individual, but rather to the company. As a skilled worker, the first step to securing an LMIA, therefore, is to find an employer willing and eager to hire you, and initiate the LMIA application process on your behalf.  To help make this match, check out the new and improved Government of Canada Job Bank.

2. There are two types of LMIA—a temporary LMIA and a Permanent LMIA—and they both have different fees.

The Temporary Foreign Worker Program (TFWP) offers foreign workers short term employment opportunities through two streams: Low-Wage positions or High Wage positions. It is the employer’s responsibility to determine and uphold the requirements of the appropriate stream by comparing the offered wage to the median hourly wage of the province/territory in which they are situated.

Permanent LMIAs, on the other hand, are designed to involve Canadian employers in the recruitment of immigrants seeking permanent residency in Canada, through three streams: the Federal Skilled Worker Program, the Federal Skilled Trades Program or—for those already working in Canada—the Canadian Experience Class.

Following overhauls to the LMIA program in June 2014, the application fee for a temporary LMIA is now $1000 CAN per foreign worker. The cost of applying for a permanent LMIA, on the other hand? Absolutely free.

3. The employer must actively make the position available to Canadian citizens and Permanent Residents before they can apply for an LMIA.

Before Canadian companies can apply for an LMIA to bring in either temporary or permanent foreign workers, they must first prove that they attempted to fill the position with someone from the Canadian workforce. LMIA applications therefore require that employers advertise the position for a minimum of 28 days—or four weeks— across three hiring platforms, including the Government of Canada’s online job bank. This advertising process must continue until the final hiring decision is made and employers are required to declare the number of Canadian candidates interviewed, vetted or even hired as part of the LMIA application.

4. Employers seeking temporary LMIAs must include a transition plan as part of the LMIA application.

Because the ultimate goal of the Canadian government is to support and grow the Canadian workforce, all applications for temporary LMIAs must include a transition plan: a ten page document which outlines five steps the company will take to recruit Canadians in the future. Such activities can include steps to make the position more appealing to already existing Canadian citizens and permanent residents, such as offering higher wages or recruiting among under-represented groups. But it can also include initiatives aimed at helping foreign workers brought in through temporary programs transition into permanent residents, such as by offering free language courses or transitioning the position into something more permanent.

Not all job sectors require an LMIA to hire a temporary foreign worker. For more information, or to find out if your industry is exempt, click here.

Have a question or comment? We’d love to hear from! Post below or write to us at info@literalis.ca.